The following sections will help you install all the tools you need to run AxonDeepSeg.

Starting with Version 2.0, AxonDeepSeg supports the Windows operating system. However, please note that our continuous integration testing framework (TravisCI) only tests AxonDeepSeg for Unix-style systems, so releases may be more unstable for Windows than Linux/macOS.

Starting with version 3.2.0, AxonDeepSeg is only supported using Python 3.7.x. Although your system may already have a Python environment installed, we strongly recommend that AxonDeepSeg be used with Miniconda, which is a lightweight version of the Anaconda distribution. Miniconda is typically used to create virtual Python environments, which provides a separation of installation dependencies between different Python projects. Although it can be possible to install AxonDeepSeg without Miniconda or virtual environments, we will only provide instructions for this recommended installation setup.

First, verify if you already have an AxonDeepSeg-compatible version of Miniconda or Anaconda properly installed and is in your systems path.

In a new terminal window (macOS or Linux) or Anaconda Prompt (Windows – if it is installed), run the following command::

If a list of available Python versions are displayed and versions >=3.7.0 are available, you may skip to the next section (git).

To install Miniconda, run the following commands in your terminal::

If conda isn’t available on new terminal sessions after running these steps, it’s possible that your system is configured to use a different startup script. Try adding the line source ~/.bashrc to your ~/.bash_profile file. See here for more details.

To install Miniconda, run the following commands in your terminal::

The AxonDeepSeg installation instruction using the Miniconda have only been tested for Windows 10. Older versions of Windows may not be compatible with the tools required to run AxonDeepSeg.

To install Miniconda, go to the Miniconda installation website and click on the Python 3.x version installer compatible with your Windows system (64 bit recommended). After the download is complete, execute the downloaded file, and follow the instructions. If you are unsure about any of the installation options, we recommend you use the default settings.

git is a software version control system. Because AxonDeepSeg is hosted on GitHub, a service that hosts git repositories, having git installed on your system allows you to download the most up-to-date development version of AxonDeepSeg from a terminal, and also allows you to contribute to the project if you wish to do so.

To install AxonDeepSeg, “clone” AxonDeepSeg’s repository (you will need to have git installed on your system) and then open the directory:

To setup a Python virtual environment named “ads_venv” with all the required packages, in a terminal window (macOS or Linux) or Anaconda Prompt (Windows) run the following command and answer “y” to the installation instructions:

For some users, the installation may take up to 30 minutes as many dependencies have shared subdependencies, and resolving these potential conflicts takes time. If that’s the case, we encourage you to take a break from your screen and go for a walk while listening to the AxonDeepSeg Spotify playlist.

FSLeyes is only supported on Mac and Linux. Windows users are encouraged to use a virtual machine if they want to use the GUI.

Then, activate your virtual environment:

To switch back to your default environment, run:

Once your virtual environment is installed and activated, install the AxonDeepSeg software with the following commands:

To update an already cloned AxonDeepSeg package, pull the latest version of the project from GitHub and re-install the application:

When re-installing the application, the default_SEM_model, default_TEM_model and model_seg_pns_bf folders in AxonDeepSeg/models will be deleted and re-downloaded. Please do not store valuable data in these folders.

Ensure that the virtual environment is activated.

To test if the software was installed correctly, you can launch a quick integrity test by running the following command on the terminal:

This integrity test automatically performs the axon and myelin segmentation of a test sample. If the test succeeds, the following message will appear in the terminal:

For some users, the test may fail because Keras is using Theano backend instead of Tensorflow. In that case, you will see the line Using Theano backend. when launching axondeepseg_test. To fix this issue, add the line export KERAS_BACKEND="tensorflow" at the end of the <your_conda_install_location>\envs\<your_environment_name>/etc/conda/activate.d/keras_activate.sh file, then deactivate and reactivate your environment. The test should print Using Tensorflow backend. and pass.

To run the entire testing suite (more code coverage), go to your AxonDeepSeg project directory on the terminal and run py.test:

If all tests pass, AxonDeepSeg was installed succesfully.

AxonDeepSeg can be run via a Graphical User Interface (GUI) instead of the Terminal command line. This GUI is a plugin for the software FSLeyes. Beyond the convenience of running AxonDeepSeg with the click of a button, this GUI is also an excellent way to manually correct output segmentations (if need to). 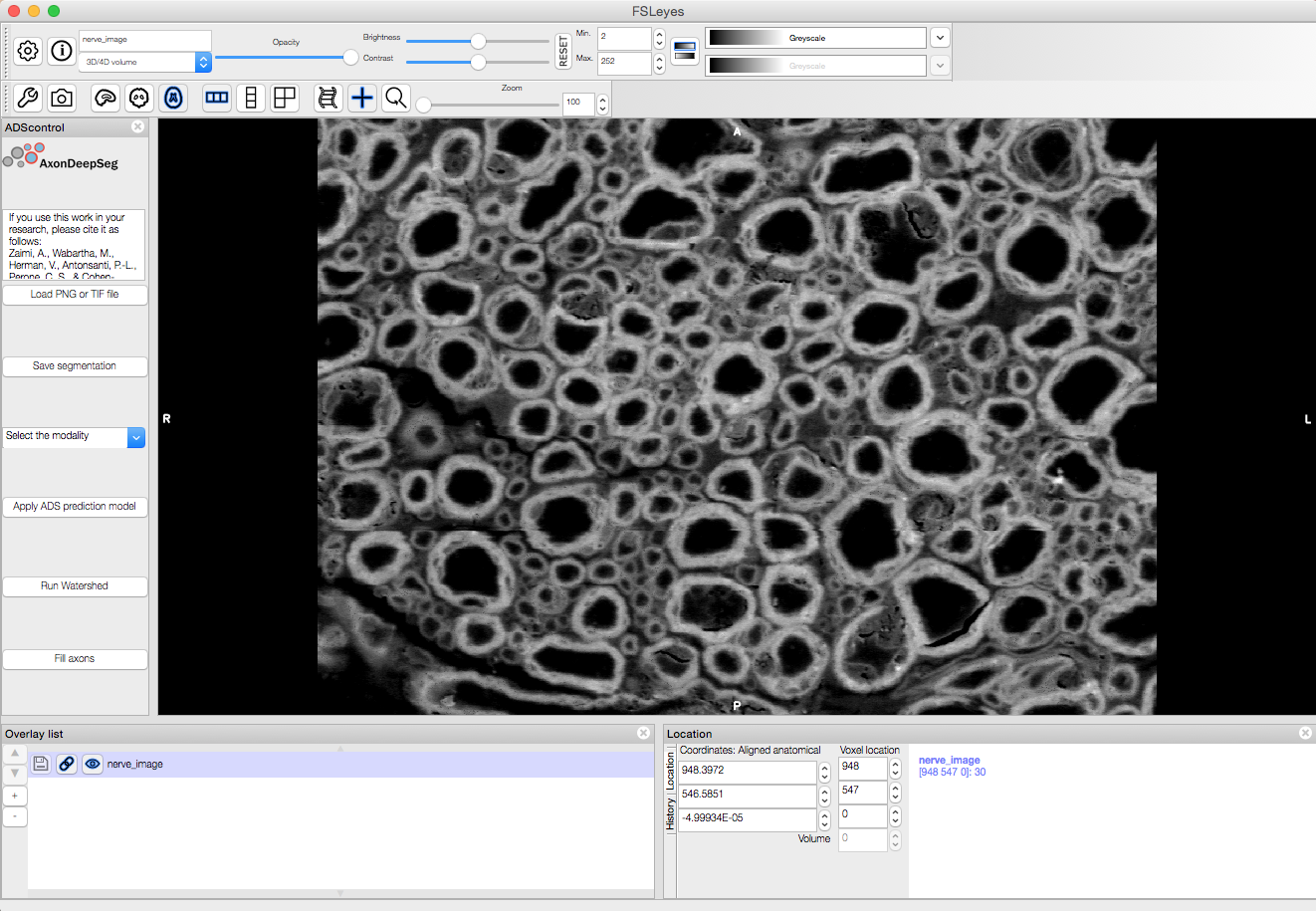 In FSLeyes, do the following: - Click on file -> load plugin - Select ads_plugin.py (found in AxonDeepSeg folder) - When asked Install permanently click on yes.

From now on, you can access the plugin on the FSLeyes interface by selecting Settings -> Ortho View -> ADScontrol.

In case, you find trouble installing FSLeyes plugin for ADS you could refer the video below.

For some users, the ADScontrol tab will not appear after first installing the plugin. To resolve this issue, please close FSLeyes and relaunch it (within your virtual environment). This step may only be required when you first install the plugin.

This feature is not available if you are using a macOS.

This might uninstall keras in the process, so we need to install it again

Three models are available and shipped together with the installation package, so you don’t need to install them separately. The three models are described below:

To use AxonDeepSeg, you must first activate the virtual environment if it isn’t currently activated. To do so, run:

To switch back to your default environment, run:

You can demo the AxonDeepSeg by downloading the test data available here. It contains two SEM test samples and one TEM test sample.

The script to launch is called axondeepseg. It takes several arguments:

Pixel size of the image(s) to segment, in micrometers. If no pixel size is specified, a pixel_size_in_micrometer.txt file needs to be added to the image folder path ( that file should contain a single float number corresponding to the resolution of the image, i.e. the pixel size). The pixel size in that file will be used for the segmentation.

You can get the detailed description of all the arguments of the axondeepseg command at any time by using the -h argument:

To segment a single microscopy image, specify the path to the image to segment in the -i argument. For instance, to segment the SEM image ‘77.png’ of the test dataset that has a pixel size of 0.07 micrometers, use the following command:

The script will use the explicitely specified size argument (here, 0.07) for the segmentation. If no pixel size is provided in the arguments, it will automatically read the image resolution encoded in the file ‘pixel_size_in_micrometer.txt’ if that file exists in the folder containing the image to segment. The segmented acquisition will be saved in the same folder as the acquisition image, with the suffix ‘_seg-axonmyelin.png’, in png format, along with the binary axon and myelin segmentation masks (with the suffixes ‘_seg-axon.png’ and ‘_seg-myelin.png’). In our example, the following output files will be generated: ‘77_seg-axonmyelin.png’, ‘77_seg-axon.png’ and ‘77_seg-myelin.png’.

To segment the same image by using the ‘pixel_size_in_micrometer.txt’ file in the folder (i.e. not specifying the pixel size as argument in the command), use the following command:

To segment multiple microscopy images of the same resolution that are located in the same folder, specify the path to the folder in the -i argument. For instance, to segment the images in folder ‘test_sem_image/image1_sem/’ of the test dataset that have a pixel size of 0.07 micrometers, use the following command:

To segment multiple images of the same folder and of the same resolution by using the ‘pixel_size_in_micrometer.txt’ file in the folder (i.e. not specifying the pixel size as argument in the command), use the following folder structure:

Then, use the following command:

To segment images that are located in different folders, specify the path to the folders in the -i argument, one after the other. For instance, to segment all the images of folders ‘test_sem_image/image1_sem/’ and ‘test_sem_image/image2_sem/’ of the test dataset, use the following command:

You can generate morphometrics using AxonDeepSeg via the command line interface.

The script to launch in called axondeepseg_morphometrics. It has several arguments.

Path to the image file whose morphometrics needs to be calculated.

Pixel size of the image(s) to segment, in micrometers. If no pixel size is specified, a pixel_size_in_micrometer.txt file needs to be added to the image folder path (that file should contain a single float number corresponding to the resolution of the image, i.e. the pixel size). The pixel size in that file will be used for the morphometrics computation.

Morphometrics of a single image

Before computing the morphometrics of an image, make sure it has been segmented using AxonDeepSeg

This generates a ‘77_axon_morphometrics.xlsx’ file in the image directory:

Morphometrics of a specific image from multiple folders

To generate morphometrics of images which are located in different folders, specify the path of the image folders using the -i argument of the CLI separated by space. For instance, to compute morphometrics of the image ‘77.png’ and ‘image.png’ present in the folders ‘test_sem_image/image1_sem/’ and ‘test_sem_image/image2_sem/’ respectively of the test dataset, use the following command:

Morphometrics of all the images present in folder(s)

To compute the morphometrics of batches of images present in folder(s), input the path of the directories using the -i argument separated by space. For example, the morphometrics files of the images present in the directories ‘test_sem_image/image1_sem/’ and ‘test_sem_image/image2_sem/’ are computed using the following CLI command:

In the literature, both equivalent diameter and ellipse minor axis are used to compute the morphometrics. Thus, depending on the usecase, the user is advised to choose axon shape accordingly.

The resulting ‘axon_morphometrics.csv/xlsx’ file will contain the following columns headings. Most of the metrics are computed using skimage.measure.regionprops.

Here is a list of useful Jupyter notebooks available with AxonDeepSeg:

If it is the first time, install the Jupyter notebook package in the terminal:

Then, go to the notebooks/ subfolder of AxonDeepSeg and launch a particular notebook as follows:

The current models available for segmentation are trained for patches of 512x512 pixels. This means that your input image(s) should be at least 512x512 pixels in size after the resampling to the target pixel size of the model you are using to segment.

For instance, the TEM model currently available has a target resolution of 0.01 micrometers per pixel, which means that the minimum size of the input image (in micrometers) is 5.12x5.12.

Option: If your image to segment is too small, you can use padding to artificially increase its size (i.e. add empty pixels around the borders).

Manual masks for training your own model

To be able to train your own model, you will need to manually segment a set of masks. The deep learning model quality will only be as good as your manual masks, so it’s important to take care at this step and define your cases.

Technical properties of the manual masks:

Qualitative properties of the manual masks:

To create a manual mask for training, you can try one of the following:

These options and detailed procedures are described in the section below “Manual correction of segmentation masks”.

If the segmentation with AxonDeepSeg does not give optimal results, you can try one of the following options:

Option 1: manual correction of the segmentation mask with FSLeyes

Whether you are a newcomer or an experienced user, we will do our best to help and reply to you as soon as possible. Of course, please be considerate and respectful of all people participating in our community interactions.

If you use this work in your research, please cite: